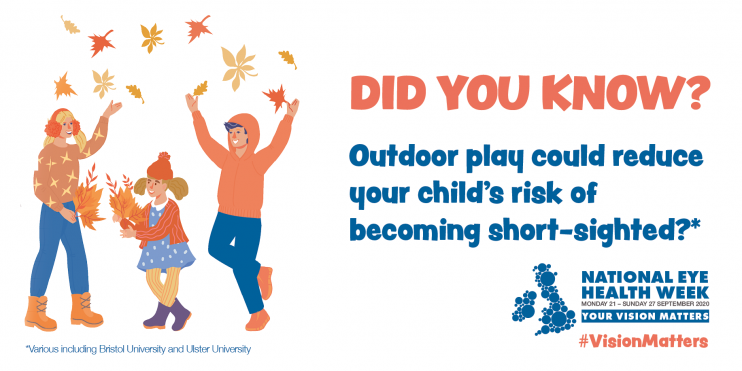 It's estimated that by the year 2050 more than half of us will be short-sighted. Spending time outdoors has been shown to reduce the risk of myopia (short-sightedness) in children.

Myopia has been traditionally viewed as a consequence of interplay between genetic, ethnic, and environmental risk factors and there are lots of studies going on to work out how we best identify those children and adults that are more likely to become short-sighted in the first place and those that may progess to "high myopia".

Children who become myopic appear to spend less time outdoors compared with their non-myopic counterparts. Additionally, the risk of myopia development and progression is significantly associated with reading at very close distances (45 minutes) rather than being associated with total time spent on all near activities.

It is not clear whether the beneficial effect of time spent outdoors is due to the brightness of light exposure, increased short-wavelength (360–400 nm) and UV light exposure, the more uniform dioptric field of view across the retina when outdoors compared with indoor environments, or other mechanisms. Although increased time spent outdoors is effective in preventing the onset of myopia, there is less evidence that outdoor time slows the progression of people who are already short-sighted.

Some studies have suggested being outside more than 3 hours per day on average can help prevent myopia although its is important also to think about sunglasses for children including during the autumn and winter when the sun is lower in the sky and the relative amounts of UV light can be higher.

Make sure children have their eyes examined regularly as early detection of some of the cues for myopia progression may be able to help prevention. There are also some "treatments" to help slow progression including Ortho-keratology lenses and soft multifocal lenses - please ask us for more advice at your eye examination.