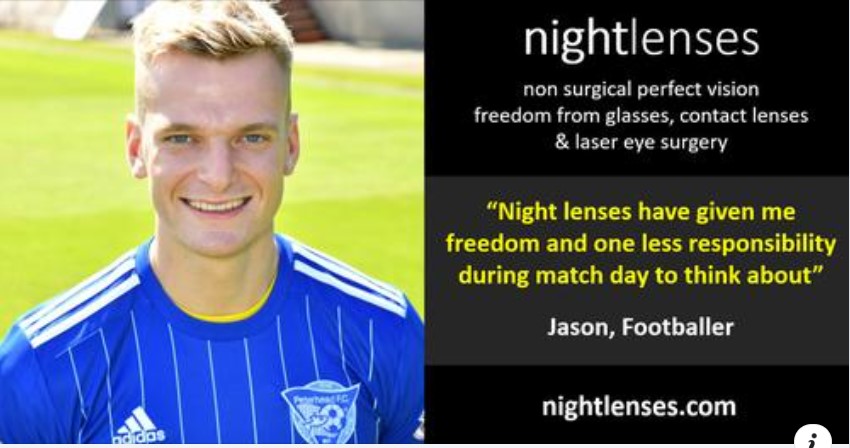 Hi Jason, what football team do you play for?

I play for a team in northeast Aberdeen currently in Division 1 of the Scottish league called Peterhead F.C.

What position do you play?

Defender! I would love to say that I’m a silky player but I’m very black and white. I’m one of those who sticks their head in when it hurts. Someone’s got to do it, so it might as well be me.

So how long have you been wearing night lenses for?

Since the start of the year. It was on my mind for a bit. I thought “this sounds kind of promising”, so I decided to give it a chance and there was no going back from there!

Before night lenses you wore day lenses. Have you ever had any issues where the lens fell out on the pitch during a football match?

I have, on a few occasions. The most recent occasion was towards the end of last season. One thing led to another, and my lens came out. I ended up having to be substituted off because I couldn’t get my new lens back in due to the circumstances of where I was. So yeah, I’ve had my day lenses come out a few times. But when that last incident occurred, I definitely thought that night lenses would be more suitable for me and my way of life.

Pretend your optician isn’t listening, have you sneakily popped your day lens back in when it fell out?

… yeah I have to say, not gonna lie. I had to do it a few times but I wont tell him (the Optician) that!

Doing so provides a risk of infection, but during a match you don’t really think about that right?

Yeah definitely, you don’t really think about it because of the circumstances. You definitely shouldn’t put the dropped lens back in, but sometimes you just have to go with what you got, and unfortunately most of the time that’s not gonna be clean or pretty

Now you are using night lenses, how much of a difference have they made for you playing football?

It’s given me that freedom and one less responsibility during match day to think about. Before night lenses I was always thinking to myself “how are my lenses feeling?” and if they weren’t feeling right then you definitely kept thinking about that. So now using night lenses has lifted a massive weight off my shoulders as there is nothing in my eyes. It’s a surreal feeling and I’m just really enjoying it

During a match with day lenses in, have you ever been in a situation where having to think about problems with your lens takes your attention away from the game?

Definitely. Quite a lot of times my contact lens would move and I would try and move it back into position, but end up making it worse. Mix that with trying to concentrate on a high intensity game and it wasn’t the best

As you are in Scotland it does rain a lot! That mixed with always looking up and heading the ball … having nothing in your eyes now must be the natural bonus of wearing night lenses?

Yeah its good, although I can’t blame my lenses anymore as an excuse! But definitely, the ball is in the air a lot and it is a very physical game up here in Scotland. But as I said, the benefits of night lenses are simple, it’s just one less responsibility to have on a match day, and one less thing to concentrate on.

Why would you recommend night lenses to other footballers?

It’s an absolute no brainer! Once you tell people about them, they just don’t believe that you can see with nothing in your eyes. Like when I told my mum dad and other family members. I can’t praise them enough. I’m loving every day life of not having to wake up and worry about putting in a lens and where they are sitting in my eye. It really is a surreal feeling and I would encourage more people to do it. I couldn’t be more thankful for my night lenses. They have been brilliant for me and they will be brilliant for many other people. I say, just go for it!

Tell us about this season, you feeling confident about it?

It’s gonna be a tough season. We aren’t one of the teams that are full time in the league. I think around 4 or 5 teams are part time. We train around 3 to 4 times a week but we aren’t in every day, so we’ve got a tough league on our hands. But its good to be involved in it and we’ll see how it goes. It’s still the early days

Is the training going well, is the team working well together?

The team is working well together. Preseason is always tough. No player likes it as it’s the worst part, but we are starting to get into the real games and its getting good now, so I’m enjoying it!