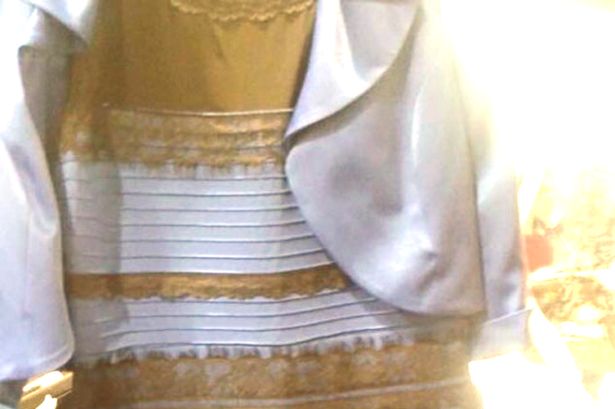 Whether you saw the dress as blue and black, or white and gold, someone has almost certainly told you that you’re wrong. But you’re not, and neither are they – it’s both colours, depending on who and where you are.

Which colour your eyes see is in fact a consequence of the way our eyes have evolved, and tells you important things about how your eyes work out colour in a world lit by sunlight.

The problem is that the brain has to avoid seeing the colour of the light reflecting off an object, and just see the colour of the object itself. If it sees a white shirt bathed in yellow sun, for instance, it needs to subtract the yellowness of the sun so that it can see the whiteness of the shirt – and it normally does.

The same kind of system is found in cameras, and is called white balance. That allows the camera to do the same thing the brain does – deciding what should be white, within the image, and adjusting the colours accordingly.

But the dress – blue and black, or white and gold – somehow confuses this system, it seems. Some brains look at the dress and attempt to discount the blue bit – something like the ambient light of night time. Others try and get rid of the effect of the gold part, because the brain sees it as the colour of a sunny day, and sees the dress as blue and black.